The 2019 race season is here, and I’m kicking it all off tomorrow at IRONMAN Santa Rosa. I finished my first season in triathlon with an IRONMAN in Cozumel on my Max’s birthday, so I figured I’d pick up where I left off this year.

But my season will hardly end in Santa Rosa. With some luck and a whole lotta training, I’ll be swimming, biking, and running in the rarified ranks of ultra triathlon- where the social capital of participating in long-form triathlon gradually falls off and people start quietly speculating on the major malfunction behind all the athletic overcompensation.

Thing is. . . there’s just not that much to my story: I miss my son. This is the only way I’ve found to show him I’d never give up on him as a father, because I can’t pick up the phone and simply tell him. I’d like to think it also might serve as a reminder for a parents who are going through hard times in their own separation to put their children first, because it’s probably hard enough on them already before adding parental alienation to the mix.

For now I have to focus on tomorrow’s leg of the journey- which is another way of saying I’ve got 4 hours to put in some sleep before I kick off the 2019 season with a dawncrack morning swim in Lake Sonoma. I’ll have to catch up with you after the race. Until then, here’s a pic of me with one of my biggest and only fans:

-IRONDAD and Speckles the Lion 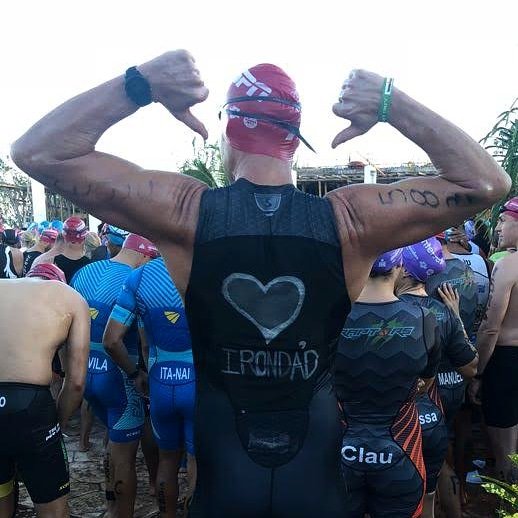 I got in the water off the shore of Cozumel shortly after 7am today and never stopped swimming, biking, and running until I crossed the finish line a little less than 12 hours later.

More importantly, for a year now I never gave up. Every time my resolve was put to the test by the next setback, I thought of you. Then I simply did whatever needed to be done to be the father I think you deserve.

I often dreamt that somehow, someway you’d be waiting for me at the finish line. I didn’t see you there, but that’s ok. You were with me from the first step I took a year ago to the last step of today’s race. I’ve kept you in my heart the whole way.

It’s been a while. To be honest, things haven’t been going the way I had imagined. For one, I never imagined that my training would leave me with little-to-no time to post updates on my how my training was going. So I guess it’s been going pretty well.  ¯\_(ツ)_/¯

In any case, I figured I’d drop a quick note while I’m chillaxin here in Cozumel on the day before the big one.

Let’s start with what’s happened since I last checked in:

My expectations for tomorrow’s race have evolved, too. When I started this journey, I indulged in occasional fantasies of an alienated father’s pain writ large in my own blood, sweat, and tears from the first stroke to the last step of this IRONMAN. While there have been plenty of all three over the past year, if things go well tomorrow I will be too focussed on executing against my race plan (in this case, to finish an IRONMAN in good form) to give much thought to what got me here.

And that MO captures my overall journey as a father much better. It’s not that hard to put in an appearance when things get tough- when a loving parent is what a child needs most. Or to drop in on Christmas in a fake beard to lodge a few good memories in your child’s head before they get all angsty and pubescent. What’s hard is showing up every day for all the ups and downs, the good and bad, and walking alongside your child for as much of their journey as you can. It’s becoming the kind of person you want your child to want to be.

I promise I’ll check in again after the race. In the meantime, here’s a picture of me shaving my legs: 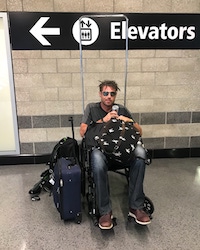 In my last post, I mentioned that the hardest part about never giving up may be understanding what it means to never give up in the first place. My first marathon offers up a good case-in-point.

I felt pretty good immediately after the race, and, finishing in under 4 hours, I had done what I had come to San Diego intending to do. After the endorphins wore off, however, I noticed pain on the outside of my left knee. When I put weight on it, my leg would occasionally fold as if it couldn’t hold my weight. By the time I got to the airport, I was hobbling along so slowly that my friend had to push me through the terminal in a wheelchair so we wouldn’t miss our flight.

But a few weeks later, I noticed that my legs never felt fresh anymore. All of my regular running paces were down by 30-60 sec/mile, and I felt like I just couldn’t keep up at the track. When I talked to some more experienced triathletes about it, the first question they asked me was how much time I took off after the marathon.

So here’s the first takeaway from this post: apparently you’re supposed to take time off after a marathon. Maybe a few short jogs in the first week; no intense interval workouts and certainly no running up and down a mountain like I did the following weekend. 🙄

My all-out-at-all-times approach to training wasn’t working. I had to do something that isn’t always easy for me. I had to try doing it someone else’s way. So I started by making an appointment with a doctor who specializes in sports medicine. Apparently I was in the early stages of overtraining and that easing off for a couple of weeks along with a little physical therapy should do the trick. It did.

Now how would I continue to progress without making rookie mistakes that could cost me weeks of training time? I came to the conclusion that I’d have to lean on someone else’s expertise, so I hit up three of the most renowned triathlon coaches in the Bay Area. And then I waited.

A few days later my top pick replied with a few questions for me. After a day of volleying emails back and forth, I convinced him to coach me. And, with that deal done, my chances of finishing Cozumel went dramatically up- along with my training volume. This time- and with this coach’s guidance- it has been ratcheted up in a way that always seems to leave me good to go for the next workout.

What this post boils down to is that to never give up is not to never let go. In fact, letting go is an important skill in the art of never giving up. If you’ve chosen a worthwhile goal, you can and should turn your back on checkpoints that initially looked like they would keep you on track yet lead to dead ends as you get a closer look at them. Put another way, the destination may or may not look like what you expected when you set out, but the journey will constantly surprise you. That’s what keeps it interesting.

I realize that the let-go sounds like some sort of washed-up spiritual claptrap. That’s because it is. But I’ll save it for the next post; right now I’ve got a long workout to put in and only 6 hours of sunlight left. 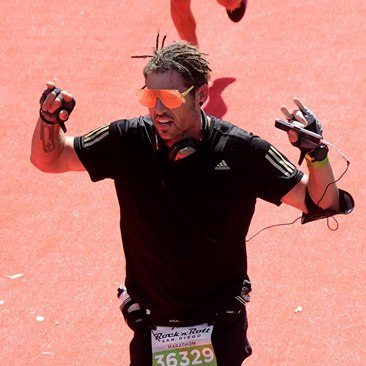 And I hope all the dads out there have had plenty of opportunities to be the best fathers they can be today. I’ve found my own opportunity in building this site to share a journey I’ve undertaken. I’ve decided to run IRONMAN Cozumel on 11/18/2018- my son’s 14th birthday.

A little background is probably in order. For the last couple of years, I’ve spent Father’s Day alone, missing my son terribly, and generally not knowing what to do with myself. I haven’t had any contact with my son since last December. And it’s very difficult for me to be an engaged father under the circumstances. That’s pretty much all I can say about that, but it should give you some idea of why this journey is so important to me.

Things have been going well so far. I finished my first Olympic triathlon at Wildflower a few months ago. I followed it up with my first marathon in San Diego. I’ll be doing at least two 70.3 IRONMANs before the big day in Cozumel.

This is how I’ve chosen to show up for my son as a father. I may not be physically present in his life, but maybe I can impart a few life lessons from afar. Like, the secret to success isn’t a secret at all. Those who find success set a goal and never give up– no matter how hard the going gets.

But what does it mean to never give up? It certainly doesn’t mean never fail. Not only will we not always win- sometimes we won’t even finish. That’s exactly when we have to remind ourselves to never give up; when we find the strength to let go of what didn’t work and open our minds with love and acceptance, a new approach will become apparent.

I hope you come back and check in every now and then. Until next time, please keep in mind that being a good father is a full-time job, and an occasional word of appreciation on one of the other 364 days of the year wouldn’t hurt. But for today, the very happiest of Father’s Days to all the other dads out there.